Purchased at auction and donated to NYMC by Dr. Jay Tartell, 2014.

"Chapel of the Asylum, Now Used as a Hospital" 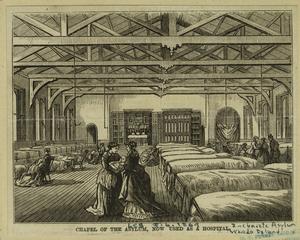 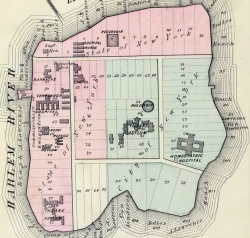 Map of Ward's Island showing the Homeopathic Hospital on the east side. 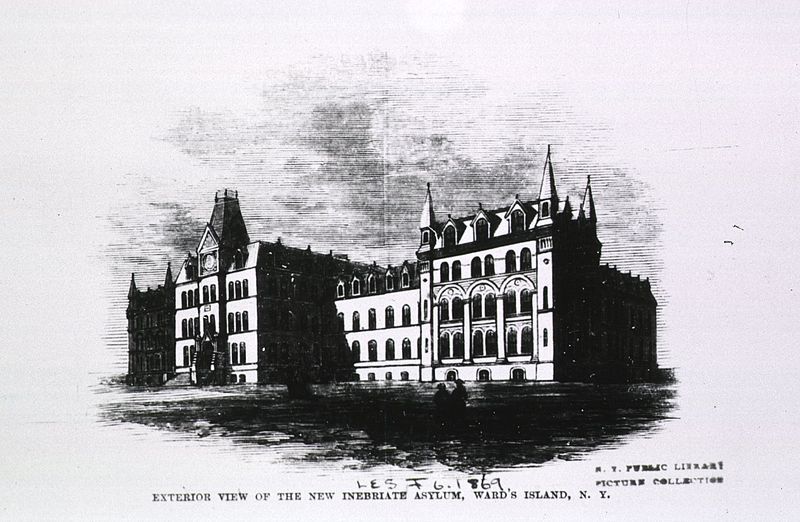 In the late nineteenth century the belief that alcoholism could be cured by confinement led to the establishment of inebriate asylums. In 1864 judges were granted the power to commit alcoholics to asylums. ¹  In the Textbook of Temperance (1869), Lees proclaims, “At last physiologists and statesmen have begun to acknowledge that the drinker's appetite is a true mania and must be treated as such. Hence the establishment of ‘Inebriate Asylums’ in various parts of the States.” ² The Asylum on Ward’s Island was opened in 1868 by the Commissioners of Public Charities and Correction, becoming the third in New York State.  In New York and its Institutions, 1609-1871 (1872), Richmond chronicles its opening, “On the 21st of July 1868 the Asylum was formally opened to the public with appropriate services and on the 31st of December the resident physician reported 339 admissions. During 1869 1,490 were received and during 1870 1,270 more were admitted.” ³

While most patients were transferred from the Workhouse, there were also three classes of paying patients, with voluntary attendance of some. ³ However, the Commissioners and the Attending Physician of the Inebriate Asylum came to agree with prevailing expert opinion that stricter confinement was necessary. Richmond explains, “The rules of the Institution were at first exceedingly mild. The patients were relieved from all irksome restraints, paroles very liberally granted and every inmate supposed intent on reformation. But this excessive kindness was subject to such continual abuse that to save the Institution from utter demoralization a stricter discipline was very properly introduced.” ³

As forcible detention came to lose favor as a means of treating alcoholism, the Inebriate Asylum closed in 1875.  The building temporarily housed the overflow of patients from the Insane Asylum, also located on Ward’s Island, before becoming the Homeopathic Hospital the same year. 4 The Homeopathic Hospital was renamed Metropolitan Hospital in 1894 when it moved to Blackwell’s Island, marking the beginning of Metropolitan’s affiliation with New York Homeopathic Medical College (now New York Medical College). 5