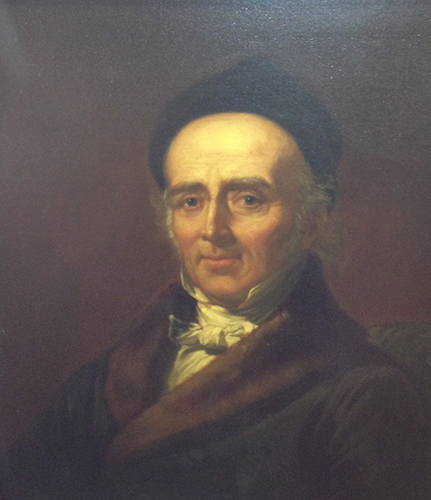 Christian Friedrich Samuel Hahnemann was born in the German town of Meissen, about 16 miles northwest of Dresden.  He is known as the founder of Homeopathy.

Hahnemann is known to have spoken several languages, and worked as a translator to support himself through medical school.¹ After studying medicine in Leipzig, Vienna, and Erlangen, Hahnemann graduated with an M.D. from the University of Erlangen-Nuremberg in 1779.³  He practiced medcine in the immediate years after graduating, but became increasingly disenchanted with the imperfections of medical practice, and returned to translation as his primary means of income.¹

In 1790, while working on a translation of William Cullen's Materia Medica, Hahnemann, "unconvinced by Cullen’s theory that cinchona was aspecific for malaria because of its tonic action on the stomach, decided to take a small dose of cinchona over several days to observe its effects." ¹  This began his lifelong study of the principles of homeopathy.  In 1796, Hahnemann published his Essay on a New Principle, detailing his work with the cinchona plant.  Later, in 1810, his seminal work in the theory and practice of homeopathy, Organon of the Rational Art of Healing, was published.

Hahnemann lectured on homeopathic principles at the University of Leipzig from 1812-1821, after which he moved to Cöthen, Germany to practice homeopathy.  Upon meeting his second wife in Cöthen in 1835, the two moved to Paris, where Hahnemann practiced homeopathy until his death in 1843 of bronchitis.¹