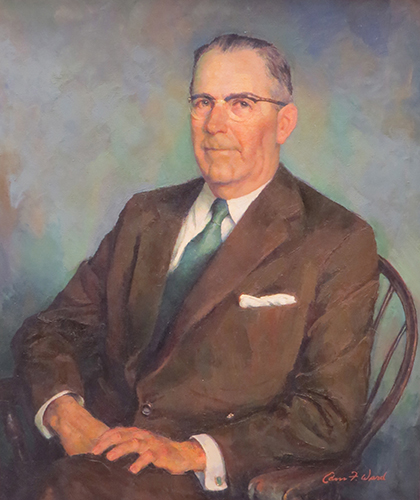 Edwin L. Harmon was Director of Grasslands Hospital, the predecessor of Westchester Medical Center, from 1938-1958. Dr. Harmon was an active proponent of medical education and the medical profession with a visionary understanding of the needs of the community.  In 1941 he led a panel discussion on how the medical and social welfare professions could work together to better the community. A newspaper article from 1955 acknowledges that under the directorship of Harmon,  “Grasslands Hospital has emerged as an educational center as well as hospital which is setting precedents in care of the ill.” According to the hospital’s 1955 annual report, Harmon was responsible for initiating training programs at the hospital, opening a school for practical nursing, developing a home care program, constructing an emergency and outpatient wing and expansion of the psychiatric facility.