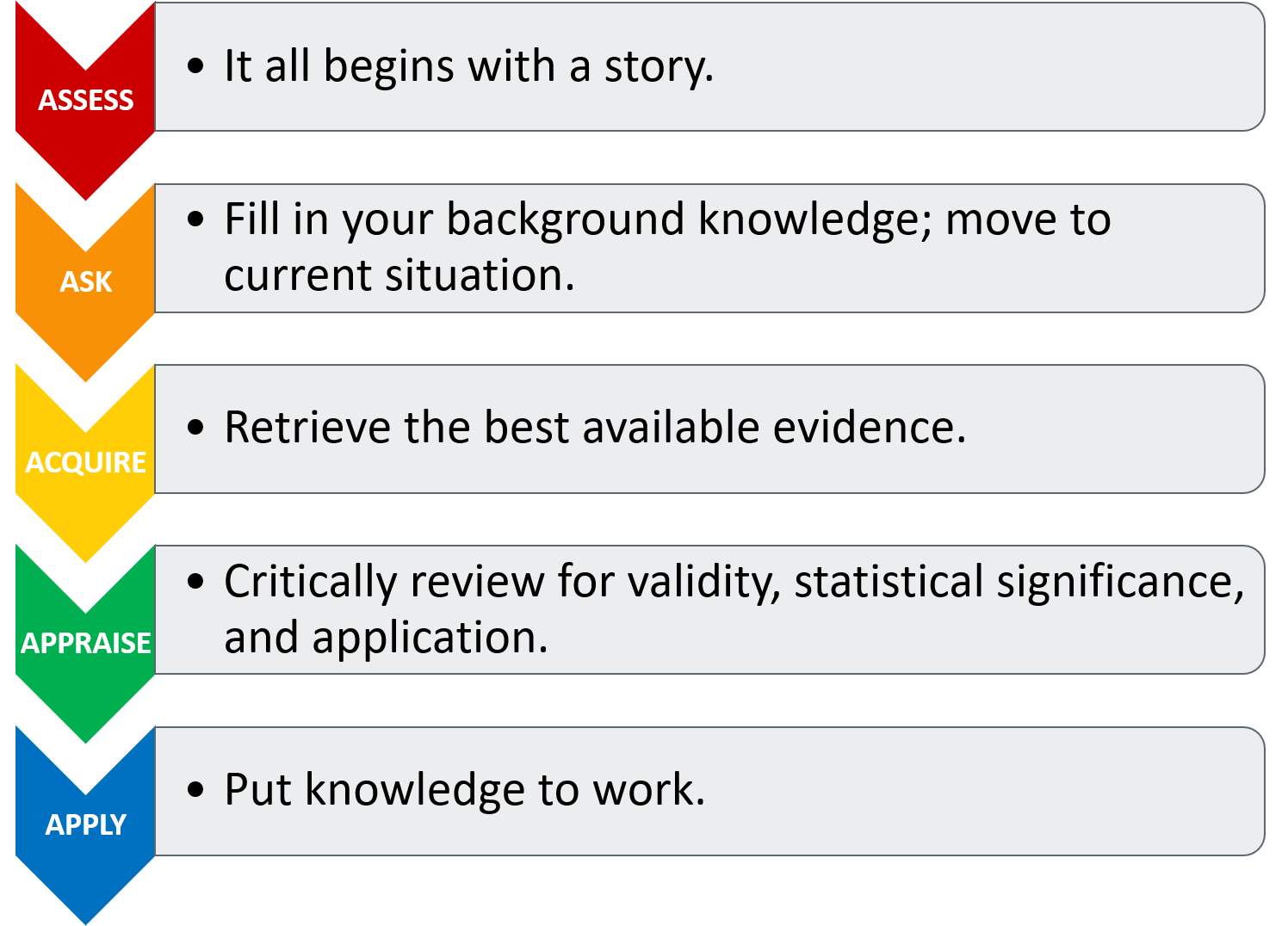 Evidence-based medicine (EBM) was originally defined as the conscientious, explicit, and judicious use of current best evidence in making decisions about the care of individual patients. The practice of evidence-based medicine means integrating individual clinical expertise with the best available external clinical evidence from systematic research.

Adapted from materials from the Centre for Evidence Based Medicine.

Adjustment:  a summarizing procedure for a statistical measure in which the effects of differences in composition of the populations being compared have been minimized by statistical methods.

Association:  statistical dependence between two or more events, characteristics, or other variables.  An association may be fortuitous or may be produced by various other circumstances; the presence of an association does not necessarily imply a causal relationship.

Bias:  any tendency to influence the results of a trial (or their interpretation) other than the experimental intervention.

Blinding:  a technique used in research to eliminate bias by hiding the intervention from the patient, clinician, and/or other researchers who are interpreting results.

Case-control Study:  involves identifying patients who have the outcome of interest (cases) and control patients without the same outcome, and looking to see if they had the exposure of interest.

Case-series:   report on a series of patients with an outcome of interest.  No control group is involved.

Cochrane collaboration:   a worldwide association of groups who create and maintain systematic reviews of the literature for specific topic areas.

Coding:   the assignment of (usually numeric) codes to each category of each variable.

Cohort study:  involves the identification of two groups (cohorts) of patients, one which did receive the exposure of interest, and one which did not and following these cohorts forward for the outcome of interest.

Co-morbidity:  co-existence of a disease or diseases in a study participant in addition to the index condition that is the subject of study.

Comparison group:  any group to which the intervention group is compared.  Usually synonymous with control group.

Confidence interval (CI):  the range around a study’s result within which we would expect the true value to lie.  Cis account for the sampling error between the study population and the wider population the study is supposed to represent.

Confounding variable:  a variable which is not the one you are interested in but which may affect the results of trial.

Cost-benefit analysis:  converts effects into the same monetary terms as the costs and compares them.

Cost-effectiveness analysis:  converts effects into health terms and describes the costs for some additional health gain (for example, cost per additional MI prevented).

Cost-utility analysis:  converts effects into personal preferences (or utilities) and describes how much it costs for some additional quality gain (e.g. cost per additional quality-adjusted life-year, or QUALY).

Critically appraised topic (CAT):   a short summary of an article from the literature, created to answer a specific clinical question.

Crossover study design:   the administration of two or more experimental therapies one after the other in a specified or random order to the same group of patients.

Cross-sectional study:  a study that observes a defined population at a single point in time or time interval.  Exposure and outcome are determined simultaneously.

Decision analysis:  the application of explicit, quantitative methods to analyze decisions under conditions of uncertainty.

Determinant:  any definable factor that effects a change in a health condition or other characteristic.

Dose-response relationship:  a relationship in which change in amount, intensity, or duration of exposure is associated with a change – either an increase or decrease – in risk of a specified outcome.

Ecological survey:  a study based on aggregated data for some population as it exists at some point or points in time; to investigate the relationship of an exposure to a known or presumed risk factor for a specified outcome.

Effectiveness:  a measure of the benefit resulting from an intervention for a given health problem under usual conditions of clinical care for a particular group.

Efficacy:  a measure of the benefit resulting from an intervention for a given health problem under the ideal conditions of an investigation.

Ethnography:  the study of people in their natural settings; a descriptive account of social life and culture in a defined social system, based on qualitative methods.

Event rate:  the proportion of patients in a group in whom an event is observed.

Evidence-based health care:  the application of the principles of evidence-based medicine to all professions associated with health care, including purchasing and management.

f:  an estimate of the chance of an event for your patient, expressed as a decimal fraction of the control group’s risk (event rate).

Focus groups:  a research method of interviewing people while they are interacting in small groups.

Follow up:  observation over a period of time of an individual, group, or initially defined population whose relevant characteristics have been assess in order to observe changes in health status or health-related variables.

Forrest plot:  a diagrammatic representation of the result of individual trials in a meta-analysis.

Funnel plot:  a method of graphing the results of trials in a meta-analysis to show if the results have been affected by publication bias.

Grounded theory:  an approach to qualitative research in which the investigator develops conceptual categories from the data and then makes new observations to develop these categories: Hypotheses are developed directly from data.

Heterogeneity:    in systematic reviews, the amount of incompatibility between trials included in the review, whether clinical (i.e. The studies are clinically different) or statistical (i.e. the results are different from one another).

Incidence:  the number of new cases of illness commencing, or of persons falling ill, during a specified time period in a given population.

Intention-to-treat:  characteristic of a study where patients are analyzed in the groups to which they were originally assigned, even though they may have switched treatment arms during the study for clinical reasons.

Lead-time bias:   if prognosis study patients are not all enrolled at similar, well defined points in the course of their disease, differences in outcome over time may merely reflect differences in duration of illness.

MeSH:  medical subject headings: a thesaurus of medical terms used by many databases and libraries to index and classify medical information.

Meta-analysis:  a systematic review which uses quantitative methods to summarize the results.

N-of-1 trial:  the patient undergoes pairs of treatment periods organized so that one period involves the use of the experimental treatment and one period involves the use of an alternate or placebo therapy.  The patients and physician are blinded, if possible, ad outcomes are monitored.  Treatment periods are replicated until the clinician and patient are convinced that the treatments are definitely different or definitely not different.

Negative predictive value (-PV):  the proportion of people with a negative test who are free of disease.

Neyman bias:  bias due to cases being missed because they have not had time to develop or ar too mild to be detected at the time of the study.

Number needed to treat (NNT):  the number of patients who need to be treated to prevent one bad outcome.  It is the inverse of the ARR: NNT = 1/AAR.

Observer bias:  bias in a trial where the measurement of outcomes or disease severity may be subject to bias because observers are not blinded to the patients’ treatment.

Outcomes research:  evaluates the impact of health care o the health outcomes of patients and populations.

Overview:  a summary of medical literature in a particular area.

p value:  the probability that a particular result would have happened by chance.

PEER:  patient expected event rate: an estimate of the risk of an outcome for your patient.

Phenomenology:  an approach to qualitative research which concerns itself with the study of individual experiences.

Placebo:  an inactive version of the active treatment that is administered to patients.

Positive predictive value (+PV):  the proportion of people with a positive test who have disease.

Post-test probability:  the probability that a patient has the disorder of interest after the test result is known.

Pre-test probability:  the probability that a patient has the disorder of interest prior to administering a test.

Prevalence:  the baseline risk of a disorder in the population of interest.

Prospective study:  study design where one or more groups (cohorts) of individuals who have not yet had the outcome event in question are monitored for the number of such events which occur over time.

Publication bias:  a bias in a systematic review caused by incompleteness of the search, such as omitting non-English language sources, or unpublished trials (inconclusive trials are less likely to be published than conclusive ones, but are not necessarily less valid).

Randomized controlled clinical trial:  a group of patients is randomized into an experimental group and a control group.  These groups are followed up for the variables/outcomes of interest.

Recall bias:  systematic error due to the differences in accuracy or completeness of recall to memory of past events or experiences.

Reference standard:  a diagnostic test used in trials to confirm presence or absence of the target disorder.

Referral filter bias:  the sequence of referrals that may lead patients from primary to tertiary centers raises the proportion of more severe or unusual cases, thus increasing the likelihood of adverse or unfavorable outcomes.

Relative risk (RR) (or risk ratio):  the ratio of the risk of an event in the experimental group compared to that of the control group (RR = EER/CER).  Not to be confused with relative risk reduction.

Reproducibility (repeatability, reliability):  the results of a test or measure are identical or closely similar each time it is conducted.

Retrospective study:  study design in which cases where individuals who had an outcome event in question are collected and analyzed after the outcomes have occurred.

Risk:  the probability that an event will occur for a particular patient or group of patients.  Risk can be expressed as a decimal fraction or percentage (0.25 = 25%).

Selection bias:  a bias in assignment or selection of patients for a study that arises from study design rather than by chance.  This can occur when the study and control groups are chosen so that they differ from each other by one or more factors that may affect the outcome of the study.

Sensitivity:  the proportion of people with disease who have a positive test.

Sensitivity analysis:  a process of testing how sensitive a result would be to changes in factors such as baseline risk, susceptibility, the patients’ best and worst outcomes, etc.

SnNout:  when a sign/test has a high sensitivity, a negative result rules out the diagnosis.

Specificity:  the proportion of people free of a disease who have a negative test.

Spectrum bias:  a bias caused by a study population whose disease profile does not reflect that of the intended population (for example, if they have more severe forms of the disorder).

SpPin:  when a sign/test has a high specificity, a positive result rules in the diagnosis.

Strength of inference:  the likelihood that an observed difference between groups within a study represents a real difference rather than mere chance or the influence of confounding factors, based on both p values and confidence intervals.  Strength of inference is weakened by various forms of bias and by small sample sizes.

Survival curve:  a graph of the number of events occurring over time or the chance3 of being free of these events over time.  The events must be discrete and the time at which they occur must be precisely known.  In most clinical situations, the chance of an outcome changes with time.  In most survival curves the earlier follow-up periods usually include results from ore patients than the later periods and are there more precise.

Systematic review:  an article in which the authors have systematically searched for, appraised, and summarized all of the medical literature for a specific topic.