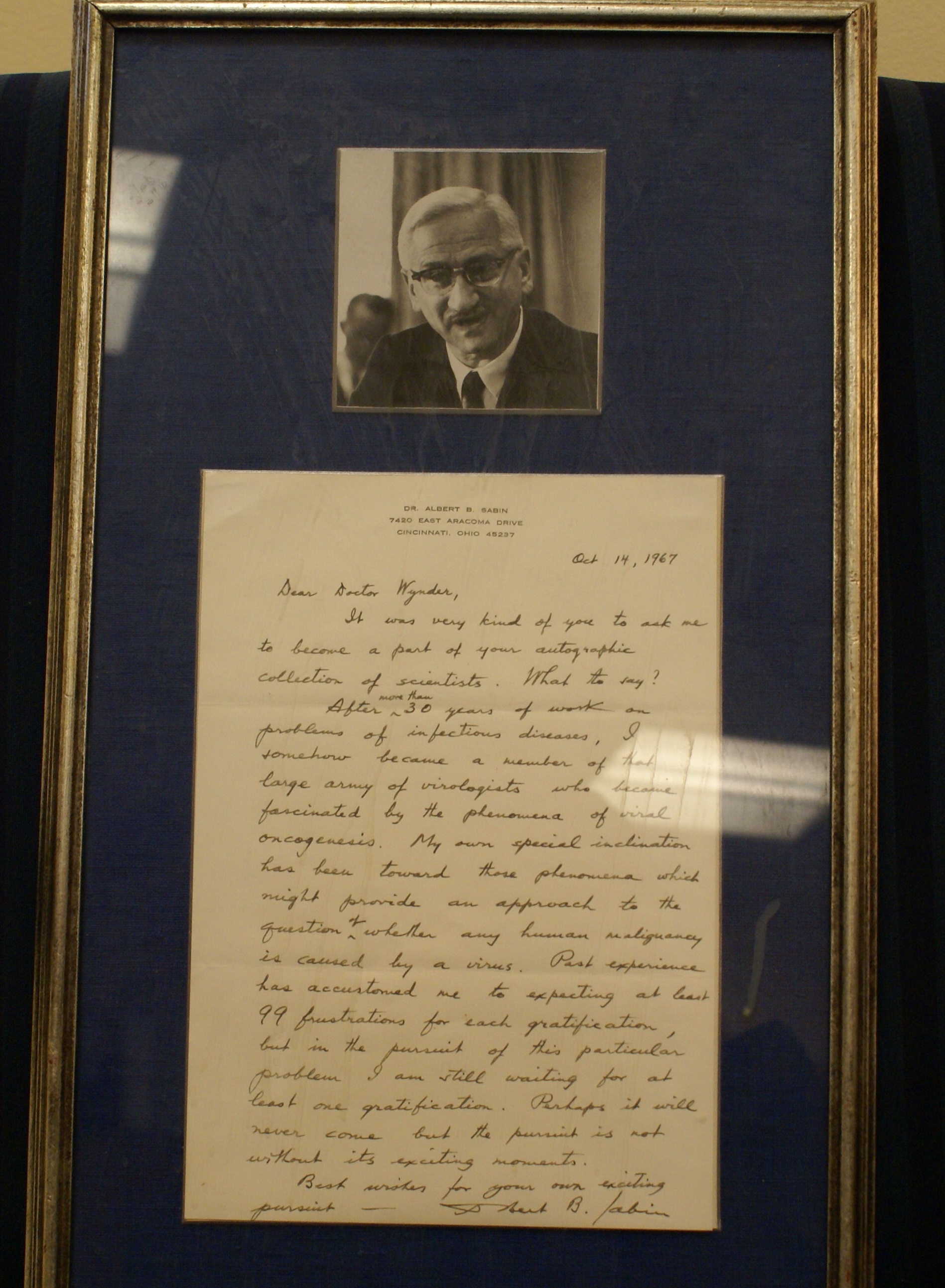 Albert Bruce Sabin was born in Białystok, Russian Empire (today Poland), to Jewish parents, Jacob and Tillie Krugman Saperstein. In 1930 he changed his name to Sabin when he became a US citizen. Sabin received a medical degree from New York University in 1931. He trained in internal medicine, pathology and surgery at Bellevue Hospital in New York City from 1931–1933. In 1934 he conducted research at The Lister Institute for Preventive Medicine in England, then joined the Rockefeller Institute for Medical Research. During this time he developed an intense interest in research, especially in the area of infectious diseases. In 1939 he moved to Cincinnati Children's Hospital in Cincinnati, Ohio. During World War II he was a lieutenant colonel in the U.S. Army Medical Corps and helped develop a vaccine against Japanese encephalitis. Maintaining his association with Children's Hospital, by 1946 he had also become the head of Pediatric Research at the University of Cincinnati.

In 1969-1972 he lived and worked in Israel as the President of Weizmann Institute of Science in Rehovot. After his return to the United States he worked (1974–1982) as a Research Professor at the Medical University of South Carolina. He later moved to Washington, D.C. area where he was a Resident Scholar at the John E. Fogarty International Center on NIH campus in Bethesda, MD.

Sabin's life is most strongly associated with the conquest of polio. With the menace of polio growing, Sabin and other researchers, most notably Jonas Salk in Pittsburgh and Hilary Koprowski and Herald Cox in New York and Philadelphia, sought a vaccine to prevent or mitigate the illness. The Sabin vaccine consists of weakened forms of the viruses that cause polio. It protects the body against polio without causing the disease. In 1955, Salk's "killed" vaccine was released for use. It was effective in preventing most of the complications of polio, but did not prevent the initial intestinal infection. The Sabin vaccine is easier to give than the earlier vaccine developed by Salk in 1954, and its effects last longer. In addition, those who received the Salk vaccine could pass on the polio virus. Sabin first tested his live attenuated oral vaccine at the Chillicothe Ohio Reformatory in late 1954. From 1956-1960, he worked with Russian colleagues to perfect the oral vaccine and prove its effectiveness and safety. The Sabin vaccine worked in the intestines to block the poliovirus from entering the bloodstream. It was in the intestines, Sabin had discovered, that the poliovirus multiplied and attacked. Thus, the oral vaccine broke the chain of transmission of the virus and allowed for the possibility that polio could be eradicated.

Between 1955 and 1961, the oral vaccine was tested on at least 100 million people in the USSR, parts of Eastern Europe, Singapore, Mexico and the Netherlands. The first industrial production and mass use of Oral Poliovirus Vaccine (OPV) from Sabin strains was organized by Soviet scientist Mikhail Chumakov. This provided the critical impetus for allowing large-scale clinical trials of OPV in the United States in April 1960 on 180,000 Cincinnati school children. The mass immunization techniques that Sabin pioneered with his associates effectively eradicated polio in Cincinnati. Against considerable opposition from The March of Dimes Foundation, which supported the relatively effective killed vaccine, Sabin prevailed on the Public Health Service to license his three strains of vaccine. While the PHS stalled, the USSR sent millions of doses of the oral vaccine to places with polio epidemics, such as Japan, and reaped the public relations benefit.

Sabin also developed vaccines against encephalitis and dengue. In addition, he investigated possible links between viruses and some forms of cancer.

Sabin died in Washington, D.C. in 1993 from heart failure.