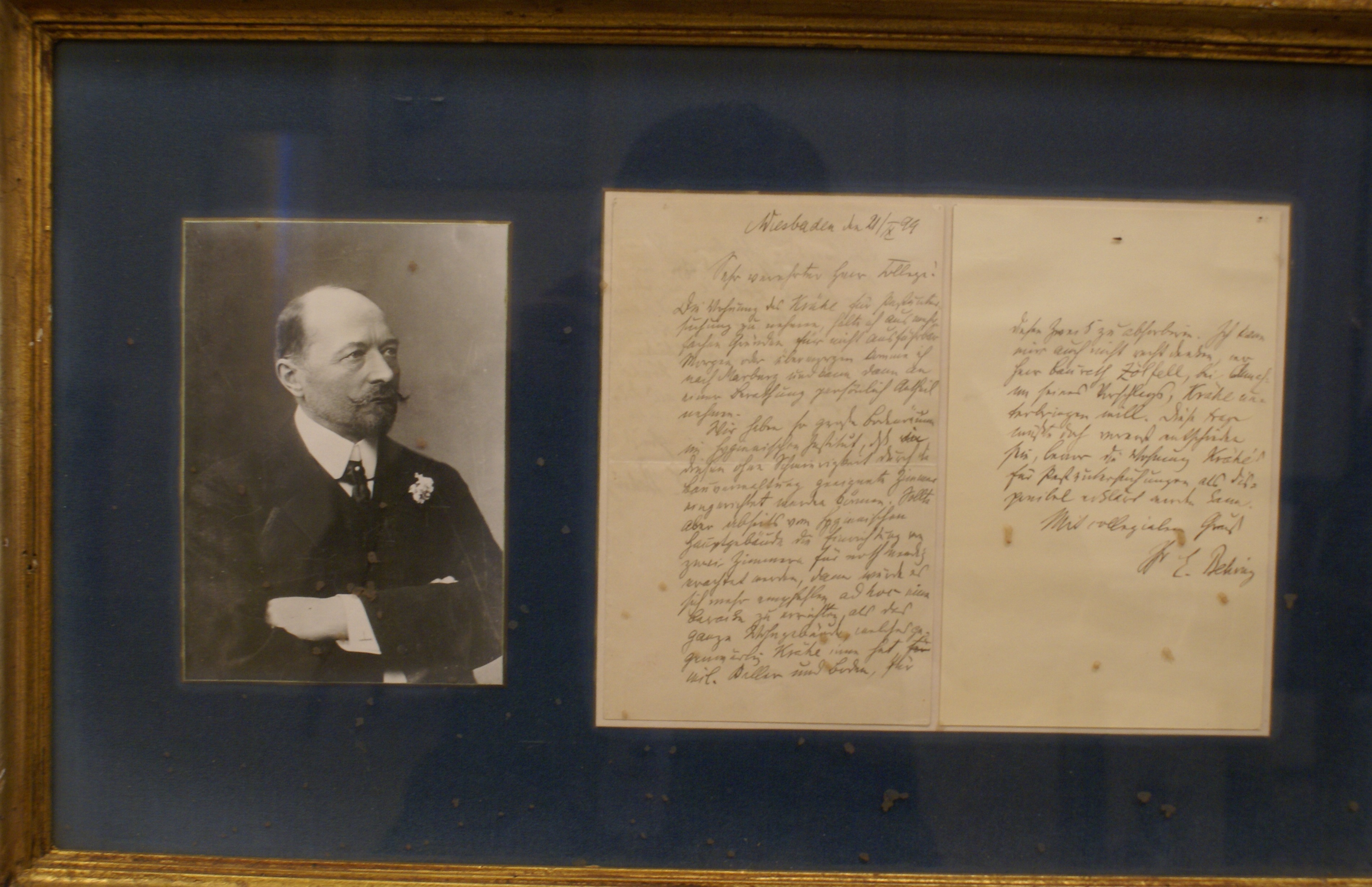 Behring was born in 1854 at Hansdorf, Deutsch-Eylau. Since the family could not afford to keep Emil at a University, he entered, in 1874, the Army Medical College at Berlin. This made his studies financially practicable but also carried the obligation to stay in military service for several years after he had taken his medical degree (1878) and passed his State Examination (1880). He was then sent to Wohlau and Posen in Poland. Besides much practical work he found in Posen time to study problems connected with septic diseases. In the years 1881-1883 he carried out important investigations on the action of iodoform, stating that it does not kill microbes but may neutralize the poisons given off by them, thus being antitoxic. The governing body concerned with military health, which was especially interested in the prevention and combating of epidemics, being aware of the ability of Behring, sent him to the pharmacologist C. Binz at Bonn for further training in experimental methods. In 1888 they ordered him back to Berlin, where he worked as an assistant at the Institute of Hygiene under Robert Koch. He remained there for several years after 1889, and followed Koch when the latter moved to the Institute for Infectious Diseases. This appointment brought him into close association, not only with Koch, but also with P. Ehrlich, who joined, in 1890, the brilliant team of workers Koch had gathered round him. In 1894 Behring became Professor of Hygiene at Halle, and the following year he moved to the corresponding chair at Marburg.

Behring's most important researches were intimately bound up with the epoch-making work of Pasteur, Koch, Ehrlich, Löffler, Roux, Yersin and others, which led the foundation of our modern knowledge of the immunology of bacterial diseases. Behring is chiefly remembered for his work on diphtheria and on tuberculosis. During the years 1888-1890 E. Roux and A. Yersin, working at the Pasteur Institute in Paris, had shown that filtrates of diphtheria cultures which contained no bacilli, contained a substance which they called a toxin, that produced, when injected into animals, all the symptoms of diphtheria. In 1890, L. Brieger and C. Fraenkel prepared, from cultures of diphtheria bacilli, a toxic substance, which they called toxalbumin, which when injected in suitable doses into guinea-pigs, immunized these animals to diphtheria.

Starting from his observations on the action of iodoform, Behring tried to find whether a disinfection of the living organism might be obtained if animals were injected with material that had been treated with various disinfectants. Experiments were performed with diphtheria and with tetanus bacilli. They led to the well-known development of a new kind of therapy for these two diseases. In 1890 Behring and S. Kitasato published their discovery that graduated doses of sterilised brothcultures of diphtheria or of tetanus bacilli caused the animals to produce, in their blood, substances which could neutralize the toxins which these bacilli produced (antitoxins). They also showed that the antitoxins thus produced by one animal could immunize another animal and that it could cure an animal actually showing symptoms of diphtheria.

Earlier in 1898, Behring and F. Wernicke had found that immunity to diphtheria could be produced by the injection into animals of diphtheria toxin neutralized by diphtheria antitoxin, and in 1907 Theobald Smith had suggested that such toxin-antitoxin mixtures might be used to immunize man against this disease. It was Behring, however, who announced, in 1913, his production of a mixture of this kind, and subsequent work which modified and refined the mixture originally produced by Behring resulted in the modern methods of immunization which have largely eliminated diphtheria as a cause of disease in the developed world.  Behring himself saw in his production of this toxin-antitoxin mixture the possibility of the final eradication of diphtheria; and he regarded this part of his efforts as the crowning success of his life's work.

His association with the production of sera and vaccines made him financially prosperous and he owned a large estate at Marburg, which was well stocked with cattle which he used for experimental purposes - largely related to tuberculosis.

(This biographical information is courtesy of the Nobel Prize organization.)